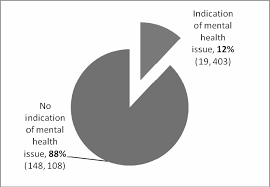 H.R. 1424 is a bill that would require health insurance providers that employ at least 50 workers to cover mental illness equally with physical illness. The bill’s passage was hailed by the mental health community, but there were critics. The White House supported the Senate version but expressed concern that the House version would include more illnesses than it did the previous year. The White House also said parity could raise costs for Medicare and other organizations spoke against the bill.

The Senate bill does not specify the specific mental conditions that insurers must cover. It leaves it to employers to decide what services they provide and what amounts. But the federal government has passed the H.R. 1424, which sets minimum levels of coverage for mental illnesses. The legislation requires group health plans to cover the same mental illness categories as the FEHBP, which uses the DSM-IV manual. If the legislation passes, this will benefit workers, employers, and consumers.

The two bills differ in several ways. The first was introduced by Senators Pete Domenici (NM) and John Danforth (MO). However, neither bill was passed. This act is still in the process of moving through the legislative process. The Senate hasn’t taken action on the S.2696 bill, but the issue has returned in the context of President Clinton’s health care reform efforts.

The Senate bill passed H.R. 1424 in March. The legislation was a bipartisan effort to make mental health benefits more equal to those for physical illnesses. The legislation included a sunset provision that would apply to services furnished after September 30, 2001. The sunset provision was later extended six times and the final extension is through December 31, 2007. While the bill is important, the insurers have managed to “circumvent” the act by imposing caps on the number of days that mental illness insurance companies will cover. Insurers were able to limit the amount of time that providers will cover for an inpatient psychiatric hospital stay.

The House bill aims to eliminate such restrictions and ensure the right to care for mental illness. It does so by prohibiting insurers from applying more restrictive limits than medical benefits. Insurers have a number of ways to circumvent the bill, including limiting the number of visits a provider can make. The legislation also requires insurers to cover inpatient psychiatric hospitalizations as a separate benefit.

Although H.R. 1424 has a strong co-sponsorship and the Administration supports the legislation, it has concerns about its provisions. The bill’s preemption provisions could lead to a patchwork of state laws and impose unreasonably high premiums. Additionally, S. 558 is not enforceable because it is not explicit about what mental illnesses should be covered. Its definition and impact on state laws is a major flaw in the bill.

The bill was introduced by Edward Kennedy and Peter Dominici. It was approved by the Senate’s HELP committee. The House version was largely successful and has strong co-sponsorship. The differences between the two bills are in the definition of mental illness and how the law would impact existing state laws. Both have a long way to go before reaching the goal of parity. The two bills differ in their intent, but they have some similarities.

The bill has strong co-sponsorship and is still in the Senate. It is still under consideration by the House. It was introduced by Sen. Paul Wellstone, who passed it in 2007. The HELP committee was a key step in the passage of the bill. The bills have a long way to go before becoming law, but are both essential in ensuring that everyone has access to mental health care.